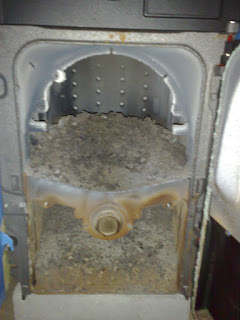 In the interest of disclosure, I am a Director of Maine Energy Systems.

After burning 0.64 tons (1280 pounds) of Energex wood pellets according to the data made available by the Janfire NH pellet burner on my system, I decided to remove the ash today to begin to get a baseline for proper ash removal intervals on my MESys 4000 system. The burner’s measurement is based on fuel density entered by the user; I entered 42.1 pounds/cubic foot based on weighing of several samples. An error in this setting would yield erroneous consumption figures.

In lab testing, the pellets I’m burning are reported to have 0.75% ash content, therefore, I was expecting approximately 9.6 pounds of ash. I opened the top and bottom doors of the boiler exposing the top of the cast iron core on the top separated from the lower chamber by removable baffles. After removing all the ash from the boiler, I weighed 12.6 pounds of ash, or nearly exactly 1% ash.

The bottom of the core was about half way up the bottom door with ash space below it. I found a small amount of ash on the cast iron and atop the baffles in the top section. I found a pile of clinkers below the burner resting on the inside bottom of the core, and I found talc-like ash in the bottom of the boiler enclosure. The clinkers were most interesting to me as they are the physical evidence of relatively low ash melting temperature (1250C) inherent in the pellets I am burning. We had been told of this attribute by the Swedish testing labs used by the burner manufacturers.

While the clinkers cause no issue for the burner or the system, they did keep some of the fine ash from falling to the storage area on the bottom of the pellet boiler enclosure. Until regionally produced pellets have sufficiently high ash melting temperatures to resist the formation of
clinkers, I will open the top door and remove the clinkers every half ton, or so, to allow for reasonable ash storage in the base of the system. After burning nearly 1300 pounds of pellets, there was ample room in the base of the boiler for lots more ash in this four-section boiler. The ash from more than two tons would have easily fit in the storage bin at the 1% volume, I discovered in this ash removal. 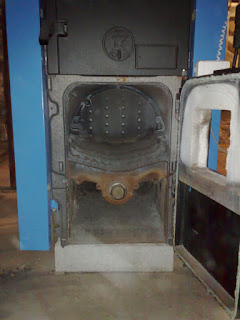 The recommended ash removal interval for the six-section boiler is every three tons of fuel; I’d be perfectly comfortable allowing 2.5 tons of fuel to run through this four-section boiler before removing the ash. However, the whole cleaning process, including opening the boiler, cleaning, and closing the boiler took me only twenty minutes, so I’ll likely empty it more frequently just because it’s easy.